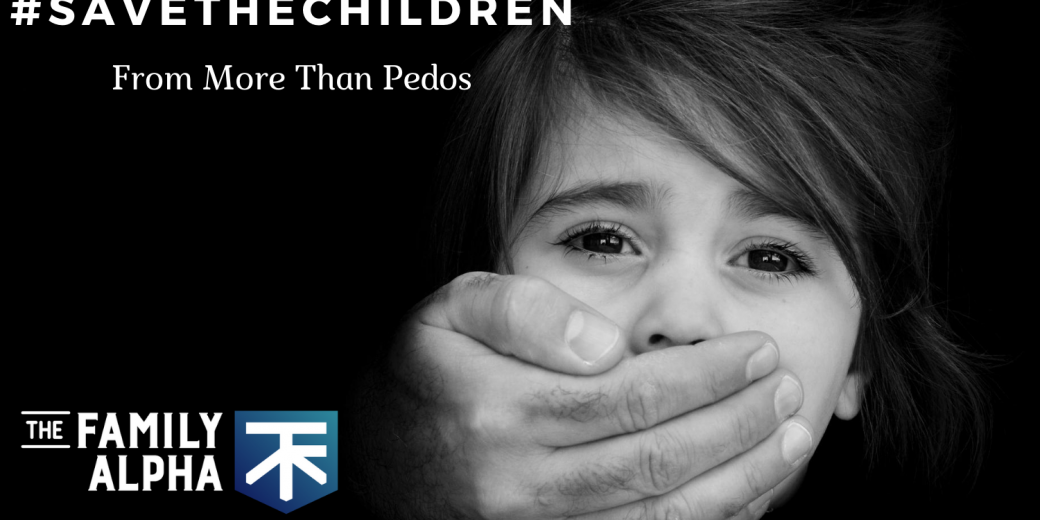 We Need To #SaveTheChildren From More Than Pedos

There seems to be an awakening to the dark underworld of child sex-trafficking in Hollywood, something which is abhorrent in and of itself, but pales in comparison to the overall global attack on children.

There are far greater dangers to today’s childrens bodies and minds than Hollywood perverts that we all (not just parents) need to be aware of.

Who do we need to #SaveTheChildren From?

When I first saw the hashtag, I wondered, what is this in regard to?

It’s sad that my mind went from pedophilia inside the circles of celebrities and politicians to the normalization of TV shows and advertisements which are sexualizing children at earlier and earlier ages.

The truth of the matter is that there isn’t one thing which preys on children, there are multiple and there always has been.

Pedophilia, sex-trafficking, sexual abuse as well as mental and physical abuse are all things which have been around as long as civilization has been around, it’s nothing new.

The issue we’re facing now is, with the advancements in so many areas, how are we still unable to protect our youth.

The answers will surprise you:

1. People don’t like talking about it. Honestly, I’ve had to step away from writing this piece a few times because of the content which I was reading while researching the numbers; it literally made me sick to my stomach to think of what these kids went through. People simply don’t like talking about the bad things in the world, especially when it’s as evil as taking advantage of kids which unfortunately leads to the plight those kids are facing being swept under the rug.

2. The media is complicit. Most people get their information from the main-stream media outlets and those outlets are run by the same people who are committing the atrocities or those who are associated with the companies; so they refuse to dive deep into the underground network these children suffer in.

3. It’s a “poor person’s” problem. A majority of affluent areas are dealing with drug and alcohol issues, they don’t see (and therefore don’t care about) the parents offering their children up for drugs or to settle scores with a dealer; they don’t see the kids being removed from dangerous home environments only to be placed inside group homes where they’re groomed for sex work by people who know, “nobody is going to miss these kids“.

4. It’s something which occurs in third world countries, not developed nations like America. Yeah, I’m a proud American and I’m calling bullshit; don’t act like we’re the model country in this, “Estimates suggest that about 50,000 people are trafficked into the US each year, most often from Mexico and the Philippines.” The numbers vary widely as very few cases are ever reported, never-mind solved.

5. “It won’t happen to my child”. Watch the video below, this is not something which is being targeted to other people’s kids, there is an overt grooming of all children that’s going on – yes that includes your little ones.

6. These atrocities are dying out year by year. What makes you think that? Is it blind hope that the “bad guys” will evolve? Evil is evil and it will always be that way, “Human trafficking earns global profits of roughly $150 billion a year for traffickers, $99 billion of which comes from commercial sexual exploitation.” This isn’t going anywhere unless people begin taking a stand and directly addressing the issue while demanding social networks and the media do the same. I’m but one blogger, what if we had 1,000,000 of us united calling for action?

7. How other parents raise their children is none of my business. I’ve caught some flak over the years for my stance against corporal punishment, but my point remains, why are we willing to discuss ways to grow financially and physically, yet any discussions on the best methods of parenting are considered taboo and off limits? “An estimated 678,000 children (unique incidents) were victims of abuse and neglect in 2018” Why are we so willing to allow children to suffer inside their homes? Why are we not open to discussing the fact that maybe, hitting and demeaning our children is not appropriate? To kids being abused, they need someone to speak up on their behalf, not turn a blind eye.

8. I don’t want to be insensitive to the differences in others. That mindset is detrimental to so many aspects of society; in the case of focusing on being “PC” and the harm it’s causing children, let’s look at Desmond Napoles. Let us also remember that pedophilia is not something to be accepted as someone’s difference and it is not something to be praised. That’s what leads to this occurrences like this from 2018, “an 11-year-old boy named Desmond Napoles, who appears on YouTube and other places around the web as â€˜Desmond is Amazingâ€™, danced in drag at a gay bar in Brooklyn, NY called the 3 Dollar Bill. Sources say the child danced â€˜provocativelyâ€™ as adult males threw dollar bills at him. You know, as if he were a stripper.“

9. I respect my children’s privacy. Being aware of and involved in your child’s “internet time” is not being overbearing. Let’s talk real numbers, “A recent poll of 2,000 teens found that nearly 75% had received pornographic direct messages from strangers, even if they had a private account. And 55% of victims of sex trafficking in 2015 met their abuser through a website, app, or text.“. My Kids are 10 and 7, my son has a phone and we monitor it. My daughter likes to watch certain crafting videos on YouTube, we monitor it. These predators are coming for our kids, you do not want to be the parent, aunt, uncle, or friend who has a young child in your life suffer a terrible fate because you were “respecting privacy“. Talk to your children about the dangers of the world, make them cognizant and situationally aware of what to look for.

10. What happens in our house remains between me and my family. That’s great, but let’s not pretend that the toxic family environment which you’ve fostered is not negatively impacting the development and future of your child. Here’s a bitter pill to swallow, you may need to #SaveTheKids from yourself. If you’re constantly yelling, arguing, threatening violence, slamming doors, mocking, or critiquing every action of your spouse or child, you’re just as bad as the people you judge on the news; pain is pain.

How can you be a better parent to your children?

Your children need you, more than anything you could buy or give them.

They need presence, not presents.

They need a mother and father who are willing to work together to ensure that they are protected, cared for, and respected.

Your kids need you to accept your personal faults and to begin working to change them.

Don’t be the monster in their life, be the example of what right looks like, be both their Shield & Spear, ready to protect them and attack on their behalf.

A kid should feel comfortable telling you anything.

How many young men and women have suffered years of abuse at the hands of a “family friend” because they were afraid to speak out? What if that child had known that you’d be there for them no matter what and you’d protect them no matter what? How much pain could have been saved?

Technology, the Internet, Social Shaming, everything being recorded, etc.

These issues are not issues a majority of us faced in our youth; few of us grew up in a time where every misstep we made as a young child or teen was fair game to be shared for the entire world to see for all time or where every TV show, ad, and social media network glamorized sexual behavior and openly mocked modesty.

One of the reasons I created Fatherhood for Modern Times was to arm fathers with the information needed in the “New Age“; one where a roof overhead, food on the table, and clothes on a kid’s back were no longer good enough.

Children need to see parents who get along with each-other and adults who have a strong moral compass with values which align with what we’d all deem a “good person” as these kids are following our example, not our advice.

They need to see modern adults navigating these modern issues and showing them the proper path forward in life.

If we want to truly help #SAVETHEKIDS we need to start by saving ourselves and living lives which embody the eradication of these unhealthy behaviors and mindsets while directly challenging every single instance of targeting children for exploitation.

Children are suffering in silence; so let us be the ones to find our voices to empower them and help those affected by the many children specific epidemics going on in the world.

For all I know, this piece will get lost in the shuffle of online content or it will get me killed if it gains enough traction; regardless of my outcome, what will you do?

Will you start paying more attention to your children?

Will you start living a life that is more intentional and aware to the plight both others are facing as well as those living within the walls of your own home?

Without you taking action, nothing changes.

Be aware, remain vigilant, and do not allow your children to suffer preventable physical or emotional trauma and pain.

You are the adult, the Shield and Spear, possibly the only thing standing between innocence and the barbarians of the world.

If you or someone you know needs to talk or report an issue there are heroes at work 24/7, please reach out:

If you’d like to support my work and help me continue to tackle the the “off limit” discussions head on any of the means below helps; to those who do Thank You in advance.