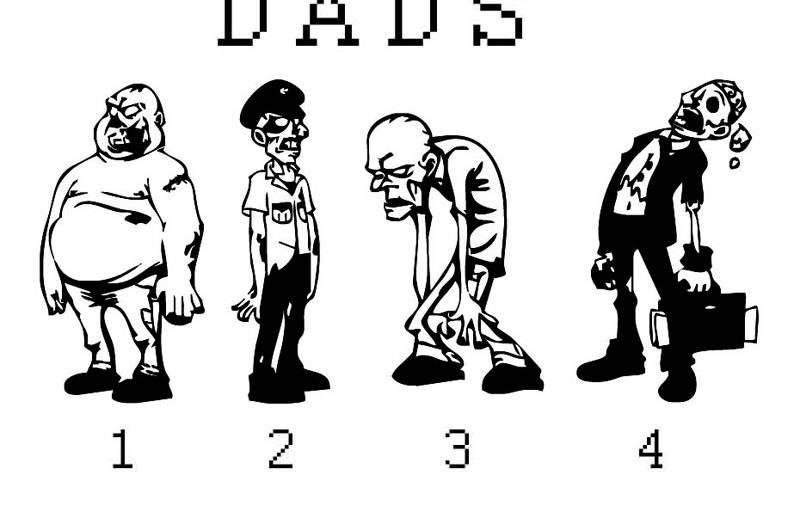 I’ve never watched the Walking Dead but what I have seen is enough commercials and people who love to talk about it so I have an idea as to what the show is about.

Keeping that in mind, when I think of The Walking Dead and try to relate it to the world we live in, what I envision is all of the fat men who are wandering around Target holding their womanâ€™s purse. All of those brain dead Dadbod zombies who are going from consumption to consumption.

You know the cycle:

Repeat this for years…

Gentlemen, we donâ€™t need to watch a TV show on AMC to get our zombie fix. We have real world walking dead (dad) all around us.

It is with the greatest misfortune that a majority of these walking dead are walking dads. It is as though as soon as a man reproduces his brain becomes numb to any internal or external stimulus which will invoke passion or masculinity. It seems that the only motivation that sparks up is that of consumption.

Ask any father you know whether he has read to or with his kid in the past month and youâ€™d be hard pressed to find one who can say yes.

Ask one of the dads you know if he has brought his son to the outdoors or a gym to teach him something about the world or the beauty of physical strength; I doubt youâ€™ll get a yes.

Ask a man if heâ€™s ever had a conversation with his daughter about the importance of strength and smarts as opposed to physical beauty for advancement in life, do you get crickets?

Now, ask the dads around you if they know who A is from pretty little liars. Ask them if they know all the lines from Family Guy or The Simpsons. Ask these men if theyâ€™ve got the newest phone or their wife has the best iPad and Iâ€™m sure theyâ€™ll be pumped to tell you how fucking cool their gadgets are.

These “men”, they truly believe in the weak mantra of Happy Wife Happy Life

What can we do to fight these plugged in zombies?

The solution to this epidemic is not to cut the heads off the zombies; but rather, to offer the cure. Some of these men are lost causes, do not expend too much energy on their behalf; if a man wants redemption, it wonâ€™t take much of a push as theyâ€™re already on the edge.

The cure for this zombie apocalypse is masculinity. Raw, powerful, lifesaving masculine power is what will cure these zombies, itâ€™s what will kill the Walking Dad.

Itâ€™s not just fathers, but the point remains that married men with kids are the hardest hit group of men out there. They are the population I have found myself a part of (Married with kids not walking dad), so itâ€™s the group that has received the most of my attention. We need to act as examples and lay some lines here and there that inject the truth of reality into these lifeless souls.

Maybe it will enter the blood stream and cure the individual or maybe it will dissipate and the zombie will continue to live its perfect weak consumer lifestyle it has up to this pathetic point.

The consequences of being one of these â€˜Walking Dadsâ€™ goes way beyond having a dadbod and being afraid of conflict.

Let me paint a few pictures to illustrate the vast range of consequences that come from being a part of the Walking Dads:

Wife loses purse, husband and son get broken jaws, and daughter is traumatized from threats of thugs.

Walking dadbod doesnâ€™t know what to do so he sits inside with his girls and cries by their side. Days go by and still, nobody assumes the role of leader to help the family out of this situation. They live in the city, the streets arenâ€™t safe, the stores are closed, and itâ€™s going to be another few days before itâ€™s safe to leave their property. The family suffers, everyone is emotionally drained, and lack of preparation devastates them for the rest of their lives.

Now he tells her he will take her back and he is sorry for not being the man she needed (See: Cuck).

I could keep going, but Iâ€™ll stop because it really sucks to write this; these things keep me up at night. This is the reality many men are facing and itâ€™s depressing. Too many men are nothing more than walking wallets to their wife and kids.

Itâ€™s time to make a change gentlemen, itâ€™s time to take back what has been stripped of you, your balls and masculinity.

Draw a line in the sand, today.

Right now draw a line in the sand and say, â€œIt ends hereâ€

Start by refusing to reward failure; do not allow others to disrespect you or your opinion on certain matters.

From there, earn the loyalty and respect that is taken by masculine men. Get control over your nutrition, grow some muscles and strength by getting your ass under the iron. Start running and doing bodyweight exercises, and add in some reading.

Remember, mental fitness is as important as physical so make time to train your mind while youâ€™re training your body.

Fix your sex life, your wife is a woman and needs you to be a god damn man, step up.

Sure, it sucks that youâ€™ve been a doormat for the past X amount of years, but those years are gone so reclaim your role in this family in the here and now.

If youâ€™ve made it this far then you are now presented with a choice. You can choose to reclaim your masculinity and live life as a real man or you can join the growing population of the Walking Dad.

Choose wisely, if you arenâ€™t with masculine men, then youâ€™re against them.