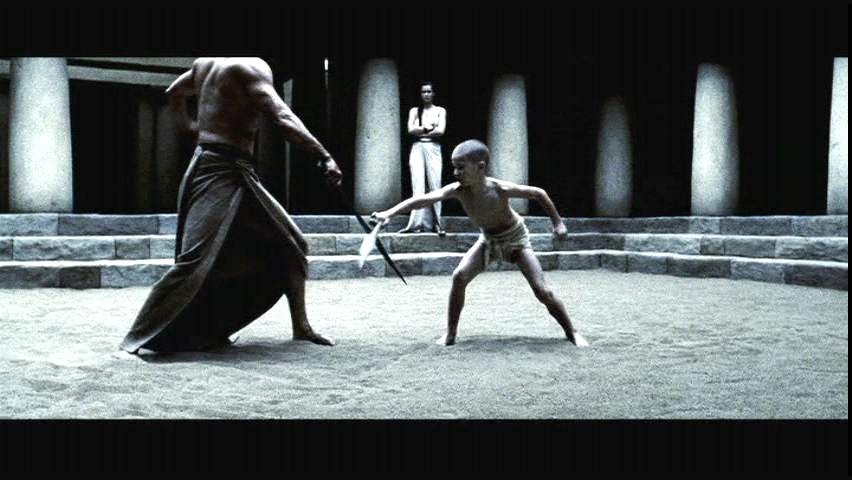 Modern Day Agoge: A manâ€™s path to raising children in a feminized society

We must train our sons because it isn’t if, but rather when our boys will face battle.

Iâ€™ve always been a fan of historical warriors, then the movie 300 came out and it planted the seed in my mind that someday I would have to raise the next warrior.

I had just graduated boot camp and I felt like I could single handedly take on the world.

I had finished my Rite of Passage (bootcamp)Â into manhood and was now on my own. I was in the best shape of my life and motivated as all hell radiating limitless energy & confidence; basically I was like every other masculine 19 year old that just entered the military.

I distinctly remember watching the movie in A school and discussing with a friend the scene where the boys enter Agoge, I told them that at the age of 7, my son and daughter would begin their Rite of Passage.

The little man turned 7 last week andÂ it has begun.

Color Code it to make it easy

Above youâ€™ll see a calendar which is color coordinated (with some help from his 4yo sister) to show what days we are training eachÂ topics.

I do not home-school my kids, yet I educate them enough that it may as well be considered homeschooling. I heard a quote recently which says, “Do not let public school interfere with your children’s education.”

I support this message wholeheartedly.

As a parent it is your responsibility to foster the mental and physical growth of your child, because it is your child.

Teachers are on a budget, limited to a certain amount of time and curriculum plus they teach a class that is geared towards the female student population.

Nobody is going to invest more time or energy into my kids than me.

I’ve broken my children’s education to the following.

Teaching them to actually think and not just memorize. To question the fundamentals of life and get to the why they areÂ doing what they do.

Boys and girls of today need to expand their mind, have those deep discussions and ponderings. I used to think that philosophers were pussies who stayed in the city while real warriors went out to fight. This regretful preconceived notion came from the fact that my dad never taught me a thing about philosophy or the philosophers whose writings were recorded and passed on through the ages.

The fact that we are still applying the life lessons of those who spoke 2,000 years ago shows that these men were not primitive just because they are ancient.

I missed out on Socrates, Aristotle, Plato, Seneca, Descartes, Locke, Epictetus and many more until I was 28; my kids will not have to wait so long.

Getting the children to appreciate the beauty of reading, writing, painting, woodworking, cooking, etc.Â  has proven to be quite difficult. While my son is resistant, his younger sister is eager, this highlights the difference between the raw masculine and feminine.

My wife will be involved with this as she has a very artistic personality. The kids needs to recognize that they does not have to rely on ‘mommy‘ to make them a fancy meal as they age.

They will not rely on getting a girlfriend/boyfriend in order to eat a quality meal at home. Too few men and women are capable in the kitchen. My wife loves to cook and does it 90% of them time, but we both know that if I wanted to, I could also cook, though to be honest I’d likely just toss something on the grill.

Even if it is as simple as watching some YouTube videos on how Da Vinci was both artist as well as inventor and showing my son that the arts can be as masculine endeavor as the rest of them. My son is much more physical and capable in the macro (wrestling, sports) world whereas my daughter excels in the micro (painting, writing) and there is nothing wrong with that. We must ensure we train their weaknesses as much as their strengths,

Teaching them the importance of balancing out a strong mind with a strong body will create the most well rounded individual. Focusing on how to eliminate the clutter that gets into our thoughts and the processed â€˜excessâ€™ in our foods. A healthy serving of kettlebells make everyone happy in our home.

They have to do some heavy lifting with me and learn to appreciate the food they are putting in their body as it is fuel for performance. They will eat to live and not live to eat and more importantly they’ll know why and howÂ they can achieve this.

I love to write and feel it is an important aspect of life. Being able to look at where you were at that point in your life, to look inside the head of your ancestors and complete strangers. There is something beautiful about looking at black squiggly lines, possibly written by someone who is long dead, and actually having them give you a physical feeling, it’s like the soul of the author reached up and touched you.

I just finished a 4 day excursion on the Appalachian Trail, I loved the feeling of being surrounded by the silence of nature, of not having the comforts of modern living and having confidence in your ability to survive if you are ripped from the elements of modern day amenities.

Hiking, climbing, plants, animals, camping, etc. It will get them to appreciate the nice things we have and more importantly theyâ€™ll learn to find comfort in the discomfort.

Theyâ€™ll find meaning in being cold & wet as well as learning how to get warm and dry to stay alive.

My son added this one to the mix (the pink boxes) because he said that he would like to conduct science experiments. I was pumped as I have now found a reason to blow things up, make volcanoes, and do all sorts of other cool stuff with him.

These topics will be discussed at length and different aspects will be examined throughout the months. Iâ€™m sure the message will change as they grow and the topics become increasingly more complex. The point remains, that this is geared towards life improvement and life understanding.

The daily topics are only a portion of their training.

They will also receive more chores as well as more freedom. I will expect them to exert themselves physically in all of their sports endeavors (he plays baseball and she plays soccer), both participate by choice and when things donâ€™t go their I sit down and break it down with them.

I will introduce both to firearms, archery, other weaponry as well as physical combat.

Why are you doing it like that? Why do you think that person said this? etc.

I want them to start observing and understanding the actions and motivators of others. I want them to see why people think the way they do and how they can influence others to get what they need as well as placing themselves in positions to succeed.

I want them to learn to be both genuine as well as manipulative.

I donâ€™t have a â€˜no throwing the ball in the houseâ€™ rule and I am always there to wrestle with my son. I also do not have a no drawing/painting rule, though I have built a special art studio for my daughter (and wife).

When my son’s friends sleep over, they wrestle and fight and cry then fight again the entire time. I donâ€™t shut it down, I let them be boys.

Someone needs to foster that natural masculine power and I have no problem doing so in my home. Let them throw down, so long as they arenâ€™t breaking bones and bleeding all over the place, who cares?

My daughter is too young right now, but when her friends come over, I’ll let the draw over walls and paint the basement if they choose. I’ll be sure to buy a bunch of canvases for them to go to town on.

Itâ€™s good for each of them violence, competition, aggression, sport, art, paint, expression, etc. I allow all of it and only step in when things get out of control or safety becomes an issue.

Recently the kids were hung up on the discussion of Stoicism vs Epicureanism.

They wanted to know why we would not let bad things bother us. It was very interesting and in my explanation, I learned a little about myself and felt like Epictetus as I was saying, those things arenâ€™t bad as long as we donâ€™t interpret them as being bad.

This is my way of fighting off the influence that public school is going to have on their mind.

Again, Iâ€™m sure the program will evolve over time, but the core pillars will remain and it is in this aspect I think all parents should pay attention. Why is it weird to have your kid write a book report for you, to solve problems, or to run experiments?

That should be the norm, yet many parents reading this fall into the ‘screen time’ category. Plugging a child in front of a screen after hours of numbing school that will kill any genuine aspect of their raw ‘self’. They’ll become yet another desensitized, weak individual in our society suffering from intense levels of self repression and self hate.

There are aspects of life that are not covered in public or private school; it is your responsibility to fill in those gaps and help your children fill their roles with your daughter being able to care for a family and you sons remaining masculine warriors.

This is how we get boys to express their masculinity vice repressing it and our girls to embrace their feminine beauty.

This is how fathers can help fight back.