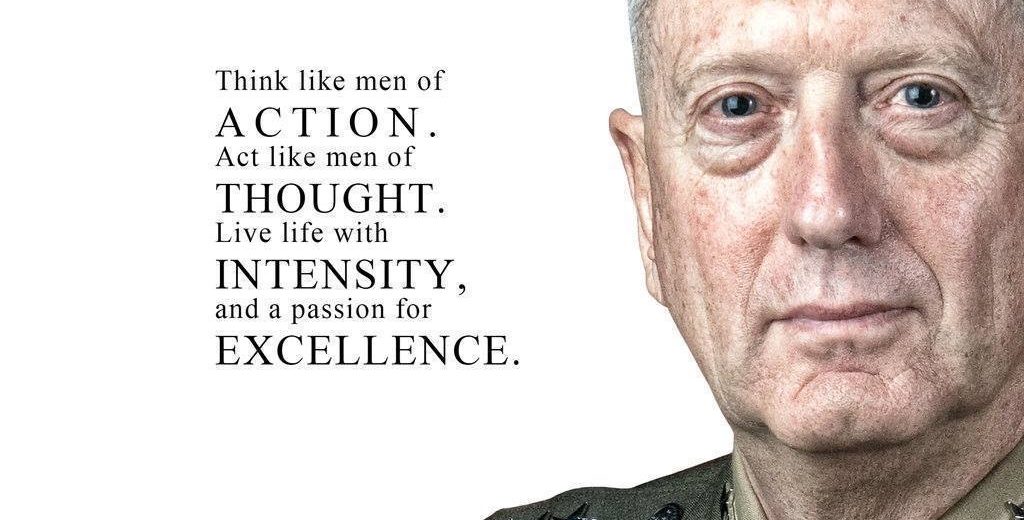 Set the bar from which all others will be measured.

This series will be a response to the mediocre, weak, embarrassing examples of fathers, husbands, and men that are portrayed on TV, in movies, and pretty much in every possible avenue in society.

There are masculine men among us andÂ each week I’m going to write about how you can take the view and aura of these powerful men and make your own version of it.

Discussing how you can become the ‘General Mattis’ of your lifeÂ and become the ‘Conor McGregor’ ofÂ yourÂ life. The purpose of these posts will be to shift youÂ away from emulating people like Peter Griffin of Family Guy or Phil Dunphy of Modern Family who are basically another child in their family.

The first Masculine Model, which shouldn’t come as much of a surprise is General Mattis, Donald Trump’s Secretary of Defense.

General Mattis is a man’s man,Â someone who is capable of both total obliteration of his enemy while at the same time ready to tend and care for those he loves most. He has the nickname ‘Mad Dog’ and has been described as a Warrior Monk.Â This is the type of man we could all learn something from.

I specifically chose the quote in the photo below as it perfectly encapsulates the entirety of this man.

He is a leader addressing his men, while at the same time he is directly confronting a problem he knows he (& his boys) are going to face (Protesters). During the brief quote he not only displays his confidence (direct hand shake) but also adds some humor (wink at the Mrs) while finishing with the ultimate slap in PC culture’s face (calling the war protester a pussy).

Men are not conflict averse, they make waves when they feel it is necessary.

This is what men do, it’s who we are to the core. We lead, we laugh, we fuck, we fight, and we make it all look like it’s just another day. We don’t complain, we just do our job and we do it with irrational levels of self-confidence and limitless energy.

Mainstream media, those who support the female imperative, and all SJWs would like you to believe that Alpha (masculine) men are these hyper aggressive, compensating, less than average intelligence meatheads. If you look inside the Fraternity of Excellence, you’ll find these same men displaying the traits and working to raise their standard even higher who are leading families, pursuing their mission, and doing so in a manner which improves their community as a whole.

Gen. Mattis is a warrior, a real tip of the spear type dude who has faced the enemy and come back alive more knowledgeable because of it. He also carries a copy of Marcus Aurelius’ Meditations with him wherever he goes.

Does a masculine man of that caliber strike you as aÂ hyper aggressive, compensating, less than average intelligence meathead?

Of course not; with that understanding it’s important you recognize that nobody defines the masculine man but masculine men.

Gen. MattisÂ is a man who places as much priority on mental strength as he does physical; something you should be doing as well.

Irrational Confidence: People believe in Gen. Mattis because Gen Mattis Believes in Gen Mattis. People will support you when you support you. Believe in yourself and your mission, start acting like you might actually stay the course this time and others will come onboard.

Mental/Physical Strength: It’s not good enough to only have a hard body just as it’s also not good enough to just have a strong mind. You must have both (There are actually three); you must read as well as lift. Train the mind as you would any other muscle, some heavy days & some light. The key point is to have balance, masculine men are balanced in every facet of their life.

No Aversion to Conflict:Â Do not view this as any sort of promotion of pointless unprovoked physical violence. When I say no aversion to conflict, what I mean, for the average man, is standing up for yourÂ genuineÂ self. Say no when you feel “No.” and “Yes.” when you mean yes. Stop agreeing to this or that in an attempt to please others. Stop telling your wife, “I don’t care what’s for dinner” when you do care. Now amplify that to every aspect of your life, stop being afraid to tell people no.Â Let the fear of being ostracized and judged dissipate, people follow the man who believes in himself and isn’t afraid to show it to the world.

General Mattis is nothing more than a man.

YouÂ are nothing more than a man.

You both have 24 hours in a day to do everything it is you need to do. It’s time to start looking at how he’s achieved his level of success as a leader and to start removing the influence our weak society and weak role models have had on you. It’s time to become the “General” of your own life, to take charge and lead yourself and others to living a genuinely masculine life in an age where the world is filled with pussies.