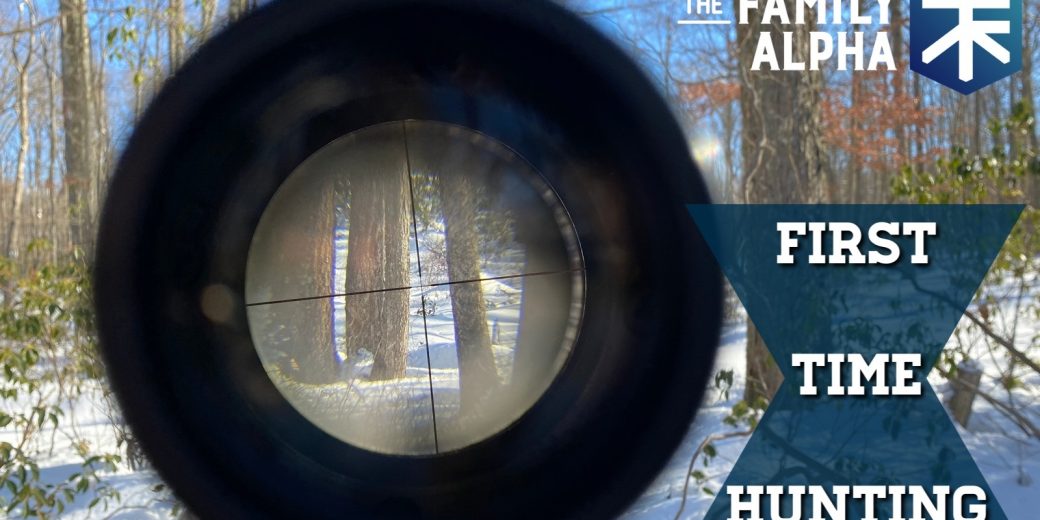 Going Hunting For The First Time at 33 years old.

I’m 33 years old and I’ve just returned from my first hunting trip ever; it was a clear reminder that there’s never a point where you’re too old to try new things.

While out in nature I had some really deep insights on who I was as a man, husband, and father which I’d never have had if I’d not decided to make this hunting trip a priority in my life.

How many men consistently pass on opportunities to do things like this because they believe they shouldn’t leave their wife and children behind to go out and do something on their own?

An FoE (Fraternity of Excellence) man hosted myself and two other FoE men at his hunting cabin for the weekend. Every man who was there was a husband and father, each of us left the family behind and contrary to popular belief, being selfish with our time made us better husbands, fathers, and men.

We rolled up to the cabin after traveling the most rugged dirt road I’ve ever seen lead to a house and once we arrived, it was on.

Anyone who’s been in any sort of male dominated arena knows, men get along in a very unique way. You’re much more likely to be made fun of by the men than complimented by them and it’s in that insult that you know, they like you.

If anyone from the “Main Stream” were listening to us in the cabin, we’d be permanently banned from all things everywhere.

Political Correctness does not exist in the “Men’s Locker-Room” aka the place where men can be men without fear of hurting feelings (which come from ovaries) and it’s good for the masculine spirit to enter that ‘Arena of Banter‘ from time to time.

It was also a time where the male social heirarchy was in plain view.

There were four of us and the “lead man” was constantly alternating depending on the discussion and situation.

For Example: I’d never been hunting before so while I was leading a discussion one minute on what the best way to write high quantity content while maintaining quality, next I was the follower learning how to properly rest my firearm or position myself against a tree.

There was a consistent ebb and flow of leader/follower throughout the weekend.

Men struggle to fit in with other men when they’re never around them; reason being, they don’t speak the language of man. It’s an art and skill which used to be passed from father (elders) to sons and in our recent age of repressed masculine nature and PC living that skill has been lost.

This “weekend with the boys” allowed me to release the energy which isn’t designed for a woman or children, it’s for the men.

Releasing that pressure within allowed me to be more engaged, happy, and less “mission oriented” at home. All men need this; all men need to be around men who are there to make them better without any regard for their feelings.

The world has made men soft, men who’ve embraced their nature as men can help their brothers become hard again.

The world desperately needs it…

I recorded a podcast that focused on the fact that “Men need to place themselves first to be their very best”.

We’ve been force-fed this notion that men need to, “Self-sacrifice their way to happiness” which is absolutely the worst advice that could be given. If anything, we need men who are choosing to be more selfish and more focused on developing themselves.

Putting yourself first allows you to grow your value as a man.

This is a fact that I don’t think can be avoided or overlooked. If you want to be someone who other people respect, find interesting, and enjoy being around then you need to have stories and achievements which show, you do things in life.

Self-deprecation is not an attractive quality; people like those who like themselves, not those who mock themselves.

There is absolutely nothing wrong with you doing things which are strictly for you to develop yourself. If the aim is to provide value for others, making yourself a priority is the best gift you can give those around you.

For Family Men: Your wife wants the best husband and your kids want the best father, investing in the improvement of all aspects of who you are as a man will do both of those things for them.

All Men: You want respect, admiration, desire, and satisfaction in life; you need to be a man of value whom others want to be around to make that happen. You have to raise the standard of your mind, body, and spirit to receive the very best of others.

If you want a better life, invest in yourself to being worthy of it.

3) Silence Is Needed In Life

I was in the cold silence of nature for hours.

I’ve been pushing hard on this blog as well as the podcast; in this time I’ve also been coaching men, watching what’s been happening on the political spectrum, monitoring the social media purging that has been occurring, following crypto, leading FoE, and being a present and motivating husband and father all at the same time.

The tradeoff has been my “nothing” time.

Sitting there in the woods with nothing more than the knock of a Woodpecker or rustle of a breeze had me engulfed in the fact that nothing was happening and it meant everything to me.

In our modern age, there is always a distraction and after this hunting trip, I learned that we need a lot less distractions and a lot more nothing to keep ourselves at peace within our heart and soul as men.