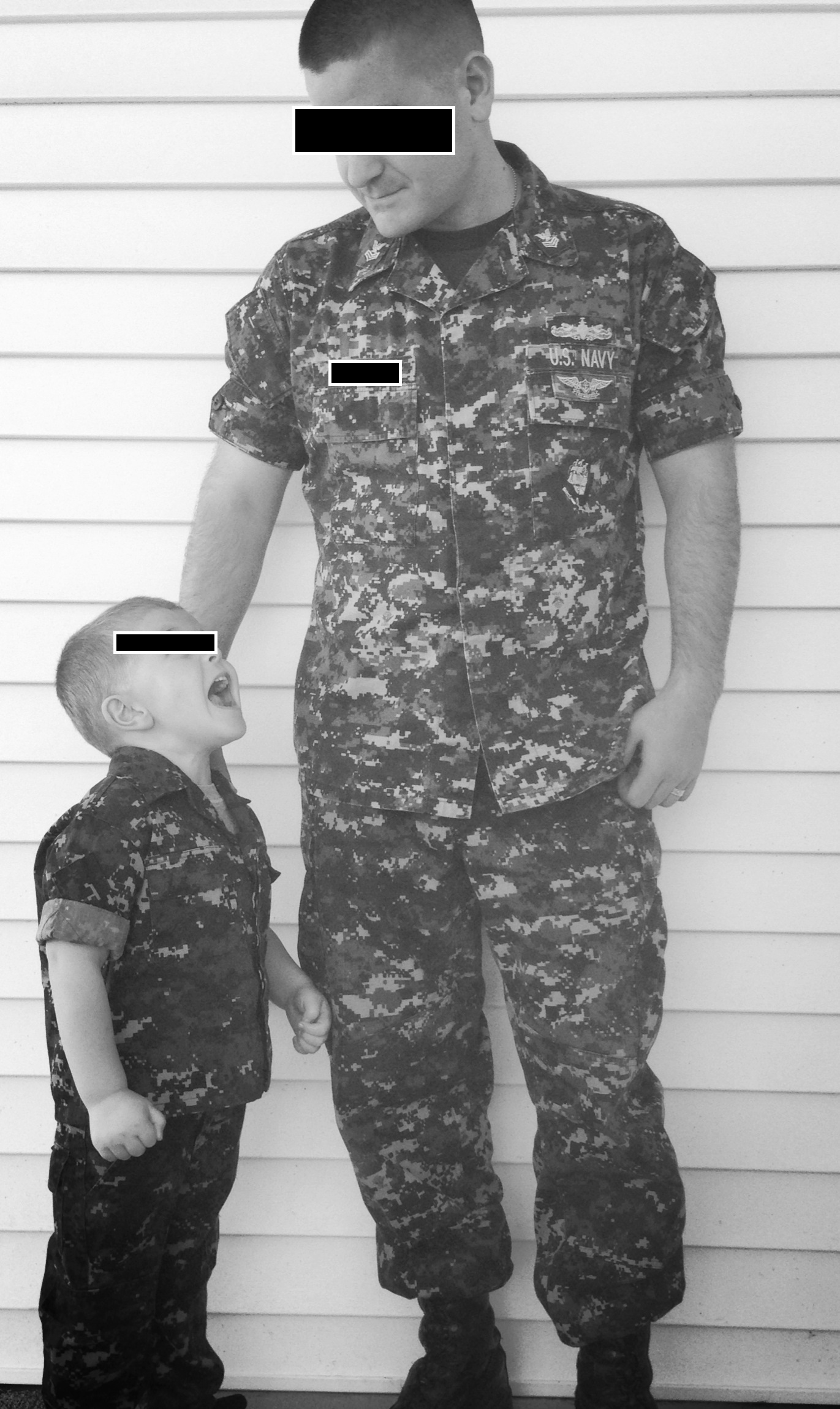 Your son will follow your example, not your advice.

I left active duty after a successful 8 year career not because I didn’t like the military, but rather because I knew I’d rather be a quality and present father than a stellarÂ sailor.

Collecting a pension at 39 sounded like a solid plan and originally it was. But after my son was born and then my daughter, I knew I couldn’t do it; 20 years was too much time away, too many moments missed. I’d get out with money but I wouldn’t know who either of my kids reallyÂ were.

In the Navy you’re in and out so much that there is never time to build anyÂ real relationship with your children. Not for me anyways, I put the Navy first choosing the hard jobs that sent me away all the time for training or deployments.

In 4 years I deployed twice, had over 600 days at sea, and this doesn’t include the TAD assignments to schools. duty, etc.

I missed my son’s first birthday, steps, appointments, all of it. He doesn’t know that, but I always will.

But, I was closing in on the 10 year mark, the point where you commit to 20 for the pension or you get out. The previous 8 years I felt I owed to my country, but after those I knew itÂ wasÂ myÂ choice. I took the masculine choice of doing what I felt was right and not what I thought would be easy.

I am now able to be the ever present force in my household. I’m writing this piece specifically for my fellow fathers who have sons. The men who have produced men and are now raising the next generation thatÂ will carry the torch of masculinity.

If you’re unaware, being a man in the traditional sense has almost become a crime. As the father of a son, it isÂ yourÂ job to ensure your little man is prepared for the battle.

Teach him to embrace and harness his masculine nature

Your son is going to follow the example you set,Â not the advice you provide him. Make sure that you are setting the standard from which he will measure himself and all men.

When you go to work on something, read a book, workout, write a paper, or have a meeting with your fellow men from time to time ensure that you are including your boy. Let him see how men act around one another, let him see how when you read a book you aren’t checking your phone every other minute, let him be immersed in an environment where you are constantly challenged and there is always banter back and forth.

I remember going to the American Legion bars and watching my dad tell ‘Sea Stories’ with the other vets. I’d sit there eating peanuts breathing in the second hand smoke thinking IÂ am a man.

These memories will always be with me as they stand out as times where I was allowed into the group. The group where women and girls couldn’t be. Even the other boys that were allowed, we never played together, it was a sit, be silent, and soak in the environment type place.

Some have never experienced this and if you cannot create it in your “real world” then consider joining The Fraternity of Excellence where Craig and I have created an electronic fraternity for men looking to forge relationships with their brethren and raise their own standard in the process.

Give your son that same opportunity & experience. Give him the mental baseline that he can refer toÂ when he is thinking,Â would a ‘real’ man do this?

Wrestle with your kid, let him expel that natural rage that exists in his heart. Have him embrace his competitive and adventurous nature. A real world example that happened recently was letting my son on the roof. I am the hanger of all Christmas lights, I’m very attentive to the details and theyÂ haveÂ to be perfectly tight and straight. My wife just works on other things and brings me my whiskey when it’s time for a break.

She knows when to just let her man do his work.

This year my son asked to help.

My immediate thought was ‘No, you’re 6 years old‘, fortunately I have been working on my mentalÂ filter and now I think before I talk,Â mostÂ of the time.

I brought him up to the roof with me and had him sit directly behind me (so he wouldn’t slide off) and he handed me the lights as I went along attaching them to the gutter.

This was another experience for him and another opportunity for him to observe me in action. Someday when I’m a broken old man, this will be his job and I’m sure he’ll remember the first time he got to go up on the roof with his dad to decorate our house.

We don’t have long before the female imperative finds its way into our son’s lives. TV shows, school, sports, etc. They all are pushing the notion that boys are inherently evil, they should embrace the feminine aspect of their mind (discuss feelings, talk it out, don’t get mad) and repress the masculine side (competitiveness, physical expulsion of energy, aggressive approach to problems) and this is the beginning of the weaksauce Dadbod dudes out there.

Don’t set your kid up for failure.

Let your little man be a man in training. Don’t let the school system tell you he is a broken daughter.

My son is now 8, daughter is 5, and I have already begun providing their education on the masculine and feminine roles boys and girls have in this world. ThisÂ may cause some conflict between you and your wife, especially if you aren’t already in your appropriate roles.

It may also provide some contention if you’re still in the process of reclaiming the ‘captain’s seat’ from her. That is something you’ll have to work on and figure out for yourself. YouÂ needÂ to be sure that your wife is onboard your ship and going to support your plan of action because if she sabotages it with some ‘gender neutral‘ parenting bullshit, your kids are going to be all jacked up like most of society’s offspring.

The cards are stacked against all of usÂ and that’s fine.Â

By living life as a masculine male and clearing a path for your son to do the same, you are at the very least giving him an advantage when it comes to figuring out who he is and what his roleÂ will beÂ in society.

As you are reading the books, taking the necessary actions, writing down your thoughts and ideas, and working to ensure thatÂ youÂ are The Family AlphaÂ I’m sure you’ve come across some opposition. Understand this, theÂ same people who shit on your success & self-improvement are going to shit on your parenting.

I’ve had moms tell me I shouldn’t let my kids climb the rock wall, even though nobody else was using it, because, “they might fall”.

I’ve seen fat dads sitting on the sideline while their kids beg and plead for them to get up and play. While that’s happening I’m swinging the monkey bars and holding my daughter.

As long as you are doing what is right and you are willing to confront those who challenge you, you are showing your son that he should do the same. If you’re a meek individual who is a ‘Yes Man‘ when the wife is around, your son also sees that.

You choose what he becomes by choosing to be a man or choosing to go along with the comfort of being a weak provider who is too afraid or too lazy to put in the work to get what he wants. We have the opportunity, as fathers of the next generation of men, to create a society where The Family Alpha is unnecessary. Our boys shouldn’t need a blog or forum to learn about being a man.

You need to make authentic living who you are andÂ notÂ something youÂ do. Fully embrace your masculine nature and when you’re out doing man stuff, bring your son.

Don’t only bring him but explain to him what you’re doing and more specifically why.

The only chance your son has is you. Nobody but a father can provide the necessary lessons in manhood that a boy needs. So take the strong path and continue to push yourself and raise the standard from which you are measuring your actions and behaviors. The days you want to just ‘relax’ and ‘take a break’ remember that those little eyes are alwaysÂ watching you. Be the man your son needs you to be.