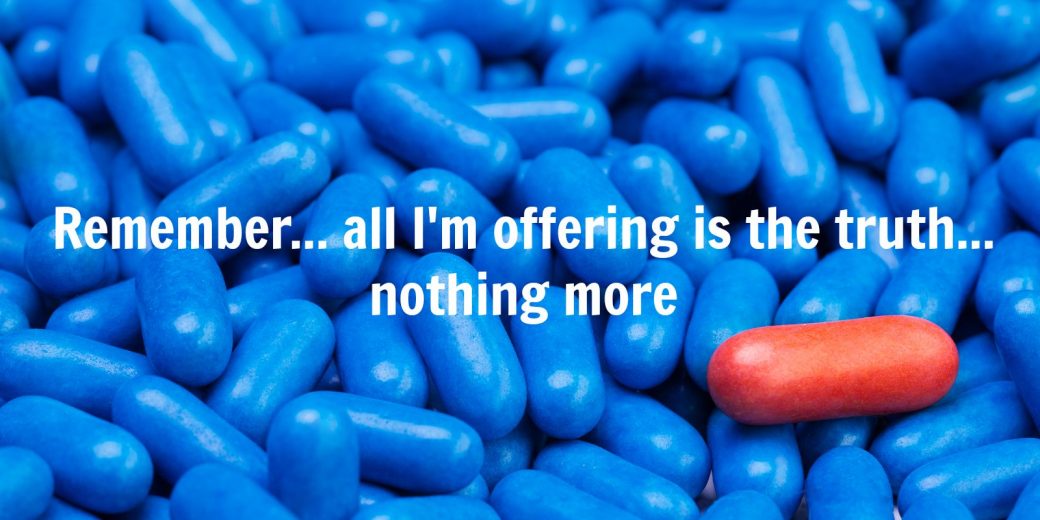 You can’t accept the truth until you accept you’ve been living a lie.

The majority of men I know (majority as in 95%) are living their lives inside of a mold that was forged for them by white knights, women, and our society as a whole. As much as it sucks to accept you, my reader, are probably a part of this group as well.

In order to take the actions necessary for improvement & ownership of â€˜selfâ€™, it is imperative you accept that you need to improve and raise your current standard. You need to accept that you are living your life within the confines of what others have told you is acceptable. Have you ever realized that your actions up to this point can be, with great accuracy, aligned with how others wanted you to perform?

As a young boy you were toldÂ fighting was bad, aggression was bad, and winning wasn’t everything.Â You were told you should settle down after high school, maybe find a girl in college and marry her. You were told that after marriage, you should expect a decline in sex and that the mantra of happy wife happy life is your best line of reasoning as a husband.

It doesn’t stop there.

You fit the bill?

You were told to sit down, shut up, work a job you probably donâ€™t like, and use the money you made to buy shit you donâ€™t need or more accurately to buy shit that you were supposedÂ to buy.

Funny how these items are all designed to keep you numb and weak (new “toys”, TVs, Video Games, cell phones,Â Â cable).

You were told that relationships are 50/50.

You were told that men and women were equals and anyone who challenged that was a sexist pig.

You were told to turn on your brothers who did not conform.

WARNING: This is where it hits you in the heart.

You were told that anyone who challenged this status quo was to be excommunicated, ostracized, black balled, ignored, and targeted for physical attack in the name of “honor”.

You were told that it was your job to fall on your sword for women and that it is better for you to sacrifice yourself at her expense than to allow a man living outside the mold to roam free.

You turned on your brothers, the ones who were there to save you.

Look at all that Iâ€™ve written, does any of it resonate with your story of how you got to where you are?

The answer is a universally uncomfortable no.

Brothers, itâ€™s time to stop doing what women, white knights, and main stream media areÂ telling you to do.

Itâ€™s time to stop letting everyone but masculine men define what a Man is.

Before you move on, look back over what Iâ€™ve written and if you fit the mold accept that.

Then let the anger, regret, disappointment, sadness, and rage flow through you.

Let your heart pound, let your head hurt, cry, puke, run, lift, whatever you have to doÂ youÂ do what you must to process thisÂ and then you man the fuck up.

Make your first masculine decision, choose to break the mold.

The second you accept that youâ€™ve been living inside of a mold you can then see the boundaries to which youâ€™ve been confined. Those transparent walls show themselves and once you see the walls, you can begin to break them.

Gentlemen, I do mean break them.

YouÂ arenâ€™t just climbing out of this mold, because that means there would be something for you to fall back into.

Youâ€™re going to break those fucking walls down and leave nothing but ash & rubble from which you will onlyÂ look back to as a reminder of your previous â€˜selfâ€™.

The beauty of masculinity is that it is completely free; masculine men know no bounds.

You will not be climbing out of your â€˜bluepill/plugged inâ€™ mold and replacing it with another structure. You will climb out of this mold and enter a world that is free of walls no longer to be constrained to anything.

You choose what you want to be.

This is where you develop your frame.

This is not a frame which holds a picture, your frame is your entire reality. It is the position which all others must exist.

In my frame my wife is fit, my children are fit, sex is crazy & frequent, there is no room for complaints, friends and family must earn my time and attention. I reject anything less, I refuse to reward failure and to be brought into the frame of another.

Your frame is for you to decide.

You need to fully immerse yourself in this aspect of reconstruction. Youâ€™ll find that you no longer know who you are, where you want to go in life, and if you’ll ever be able toÂ forgive those who created the mold you suffered in for so many years.

This suffrage can, if allowed, be met by an equally powerful force. The limitless & irrational self confidence that all masculine men display.

You will feel these dark depths of depression and angst, but youâ€™ll also feel this burning fire in your heart that will not extinguish. When the mold is broken and you are standing there looking at the blank slate that is the rest of your life the fear & joy are so overpowering and equally present that you will find yourself laughing and smiling then crying minutes later.

This is a turbulent period in your reconstruction, but if you choose to follow the masculine path, youâ€™ll only have to do this once.

Your unplugging from the feminine imperative, the one that created your mold also has a literal component to it. You must unplug yourself from the mainstream media. You must pull the plug of your mind from numbing TV shows, music, and MSM news outlets. You must unplug from all the activities that keep you unproductive you must break the pattern of redundancy without progress.

If youâ€™ve been doing the same thing day in and day out and are no closer to your goals, remove those unproductive habits. Youâ€™ve had enough â€˜0â€™ days, itâ€™s time to ensure that every action you are taking has a purpose. Every action, hobby, and habit that you have should be bringing you towards a goal. If you donâ€™t know why youâ€™re doing somethingÂ then why are you doing it?

Youâ€™ve decided to break the mold, now break the habit of numbing yourself.

Draw a line in the sand.

Set your first boundary and be ready to enforce it. Make that line the line that youâ€™ll never cross again. Before you can rise up and pursue the greatest version of you that you can you must first stop falling deeper into the mold. That line is it, refuse to repress your true self ever again refuse to go against your gut feeling, refuse to reward failure and begin to set standards for yourself as well as those around you.

Never again will you try to be the person you think others will like.

From here on out you will be unapologetically you.

Immerse yourself in endeavors that require effort.

Set goals and create a road map with checkpoints to reach them.

Remove I donâ€™t care from your vocabulary.

When your wife asks what you want, be honest.

Start working out and when asked why tell people itâ€™s because you want to live a healthier life.

Start recognizing instances of repressed masculinity in MSM, social media, and in interactions with your friends & family.

Recognize you need to game your woman, lead your family, and find comfort in the discomfort of living life as a masculine male in a society where weakness is praised & disgustingly glorified.

Be awareÂ that you cannot gain anything by living in the past.

Do not resent your wife, family, and friends for allowing you to become so pitifully weak. They didnâ€™t do this to you, you did it to yourself. You compromised your true â€˜selfâ€™ and they did as society told them. It is not their fault, so let the grudge die and channel that energy towards greater productivity.

Understand that relationships may not survive.

If you got married or started dating while living inside that mold which was created for you, the people you committed to chose the man in the moldÂ so be it.

You are no longer that man.

I will leave you with this, if you do not take the initiative to make these things happen then they never will. You are never going to reach that â€˜Disney endingâ€™ where people love you for who you are and the world respects you just because youâ€™re a man.

The void in your heart, it’s the void of repressed masculinity, you can’t fill it by buying more ‘stuff‘; only by living in accordance with your true nature.

You must command yourself and only then will you be in a position to command others.

Accept that the mold exists, accept that youâ€™ve been living in it for too long, and take the actions to destroy those walls and join your motivated masculine brothers who are roaming free.